Plasma torch for welding and cutting 1/1

Generally, welding arc is carried out without external constraints. The diameter of arc column changes with the arc current and voltage. The energy is not highly concentrated and the temperature is limited to 5730 ~ 7730℃, so it is called “free arc”.  If the arc column of the free arc is forced to “compress”, the conductive cross section can be shrunk to a smaller size, so that the energy is more concentrated and the gas in the arc column is fully ionized, as shown in  《Schematic diagram of plasma arc generating device》. Such arc is called plasma arc.

Besides solid, liquid and gas, plasma is the fourth existing form of substances ionized by gaseous substances. It is a gas-like substance with good electrical conductivity composed of positively charged ions, negatively charged electrons and some neutral atoms that are not ionized.  Plasma arc is a kind of compressed arc. The transverse section of arc column decreases and the ionization degree increases with the increase of current density.  Plasma arc has more concentrated energy and higher column temperature than ordinary free arc. Choosing proper specification can make plasma arc flame flow with high velocity and produce great mechanical scouring force, so it becomes a more ideal energy for welding and cutting.  The forced compression on the arc column of free arc is generally called compression effect.  There are three forms of compression effect: 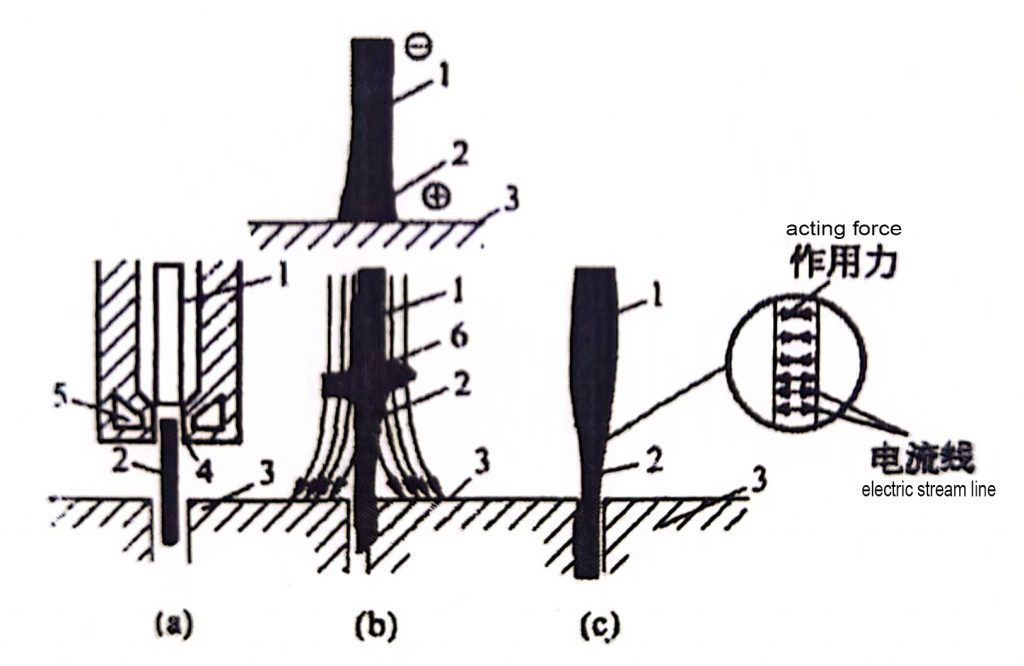 Under the action of the above three effects, the arc column is compressed to a very fine degree, and the gas in the arc column is highly ionized. The temperature is up to 16000-33000 ℃, and the energy density increases sharply. Moreover, the arc stiffness is good, and the arc has strong mechanical scour force, forming the plasma arc of high-energy beam.

The characteristics of plasma arc are as follows:

1) High temperature and energy concentration Due to the compression of the arc column of the plasma arc, the gas reaches a high degree of ionization, resulting in high temperature. The energy concentration of the plasma arc at the center temperature of the arc column is 18000-24000K, and its energy density can reach 105-106W /cm2.  The center temperature of the free argon tungsten arc column is 14000-18000K and the energy density is less than 105W/cm2.  Therefore, plasma arc used for cutting, can cut any metal, such as good thermal conductivity of copper, aluminum, and high melting point of platinum, tungsten, all kinds of alloy steel, cast iron, low carbon steel and stainless steel.

3) The arc stiffness is good and the stability is strong. After compression, the shape of the plasma arc has changed greatly and becomes cylindrical.  Compared with the general arc, the divergence Angle of the arc column is only 5°, while the tungsten-argon arc in free state is 45°. Therefore, the plasma arc has better stability, less sensitivity to the change of arc length, better stiffness, and less influence of external air flow and magnetic field on the plasma arc

4) Large impact force under the action of mechanical compression, thermal contraction and magnetic contraction three kinds of compression effects, the plasma arc has a small section, large current density, high temperature rise, the internal has a great expansion force, forcing charged particles from the nozzle high-speed ejecta, flame flow speed can reach 300m/s above.  Therefore, can produce a lot of impact force, used for welding, can increase the melting depth;  Used for cutting, can blow off slag;  Used for spraying, can spray powder and so on.

There are many applications of plasma arc. With the continuous maturity and development of plasma arc technology, it will be widely used in all aspects of production.  At present, its main application has the following aspects：

4) Plasma spraying Plasma spraying is a process method in which the powder spraying material is heated and accelerated by plasma flame flow (i.e., non-transferred plasma arc) as the heat source and sprayed to the workpiece surface to form a spraying layer (Figure 1-42).